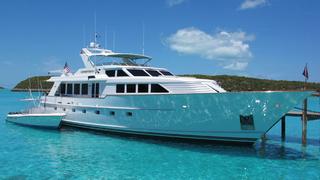 John Todd at Burger Yacht Sales tells me there's been a $300,000 drop in price on his central listing, the 27.7m motor yacht Current Issue.

Built by Burger Boats in 1994 and refitted in in 2006, John says her current owner, a former NYYC Commodore, has kept her in immaculate condition. Accommodation is for six guests in three cabins. Twin 1,080hp Detroit Diesel engines give Current Issue a range of 1,100 nautical miles at 12 knots.

Current Issue is currently on display at the Superyacht Open House Network, Goat Island Marina in Newport, Rhode Island, and will be participating in the Superyacht Hop on Thursday 26 July.