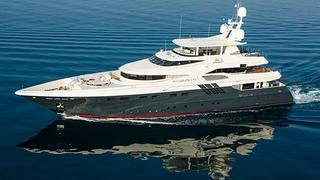 A call to Michael White at Ocean Independence brings news that the 42.9m motor yacht Robusto has had a €2.2 million price cut.

Built in aluminium by Lloyd’s Ships to DNV class to a design by Bernie Cohen, Robusto had an extensive refit in 2006/2009, which saw her stripped back to bare metal. MCA compliant, she accommodates up to 10 guests in five staterooms and twin 2,735hp MTU engines give her a cruising speed of 12 knots.