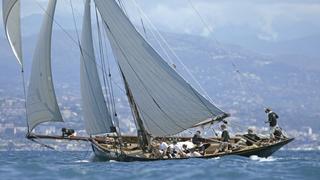 A call to Mike Horsley at Edmiston & Company brings confirmation of a €145,000 price drop on his central listing, the 17.98m classic sailing yacht Marigold.

Marigold is an extraordinary vessel in all respects. Not only was she the first of Charles Nicholson's large yacht designs, built in 1892, but the story of her restoration in 1992 is one of passion, determination and ultimately, success. No lover of classic yachts will remain unmoved by the sight of Marigold powering along on a broad reach, with her perfect wave formation gently caressing her aft quarter. Her plumb bow and elegant counter stern are all testimony to the youthful genius of Charles Nicholson in the latter part of the 19th Century.

Many years, many miles and much investment later, Marigold now once again graces the regatta circuit for which she was in part designed. Also a fine cruising boat, her rig is surprisingly easy to handle and her mahogany interior, based largely on the original, provides what would have been considered sumptuous accommodation for her guests.