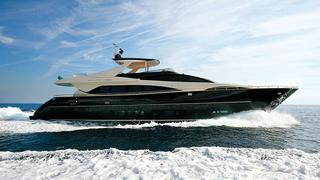 A call to Mike Newton-Woof at Ventura UK confirms a €1 million price drop on the 28.22m motor yacht Emocion.

Following in the footsteps of her sisters, the 92' Duchessa is arguably the sleekest and most stylish of Riva's decidedly upscale motor yacht range. Her sweeping and elegant lines are accentuated by the stark yet purposeful hardtop.

This is not just a styling element, it is a well designed and practical application from the mid fly bridge to the forward helm station, covering a teak dinette, aft-facing settees and a bar to watch the sun set or just socialise throughout the day.

She carries a lot of interior volume for her length. Guest accommodations include a full-beam master stateroom aft with his-and-hers bath with both tub and shower, a VIP stateroom forward that mirrors the master except for a smaller bath, and guest staterooms port and starboard with twin berths.