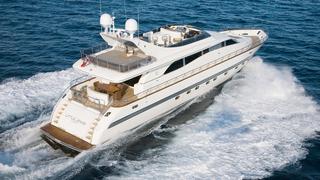 The 26.1 metre motor yacht Little Jems, listed for sale by Tom Barnes at bluewater, has been sold to a direct client.

Built in GRP by Italy’s Arno yard to an in-house design, she was launched in 2004 as the last of the Leopard 26m fly series built (hull nine of nine). An interior in satin varnished light oak comfortably accommodates up to nine guests in four cabins consisting of a master suite, VIP suite and guest cabins to port and starboard plus a Pullman berth, all with en suite bathroom facilities.

The open plan saloon and dining area is elegantly furnished with comfortable seating in neutral colours and is filled with natural light from the panoramic windows. A full entertainment system includes a large plasma screen television with Crestron remote controls. Great volume is offered over its two decks, with a spacious area for dining on the aft deck and a large sunbathing area with bar on the sundeck.

Since her launch in 2004 she has been regularly upgraded and immaculately maintained by her full time crew. An impressive Sky television and multimedia system has been recently installed, and an early MTU W5 service has just been completed on her main engines.

With new generators, tender and a jet ski aboard she truly is ready to go for her new owner. Twin 2,000hp MTU engines give her a cruising speed of 23 knots and a maximum speed of 27 knots.