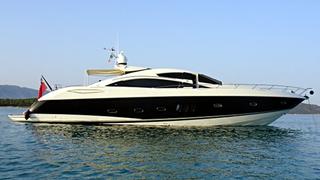 More news in from Harry Bristow-Holmes at Sunseeker London as he tells me of a major price reduction on the 25m Sunseeker Predator 82 motor yacht confusingly called Mangusta.

Built to a high level of specifications in 2007, Mangusta sleeps eight guests in four staterooms and twin 2400hp MTU engines linked to powerful Arneson drives power her to speeds of 46 knots.