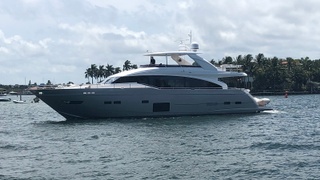 A 26.82 metre Princess 88 motor yacht, listed for sale by Mike McCarthy at HMY Yacht Sales, has been sold in a direct deal.

The main saloon has the standard Princess 88 layout with an L-shaped sofa on the port side and a traditional sofa to starboard. It also offers two relaxing armchairs aft and an entertainment centre including a 50-inch Samsung television screen and a stereo surround sound system. The floor is planked wenge throughout. On the starboard side of the saloon there is the ever-popular electro-hydraulically powered fold-down balcony which is the perfect place to relax and enjoy a drink before dinner.

Her elongated flybridge features a spa pool and plenty of space for alfresco living, with sunken seating forward and plenty of sun pads. Twin 12V 2000 M94 MTU diesel engines power her to a cruising speed of 20 knots topping out at 29 knots and she is fitted with Trac zero speed stabilisers.