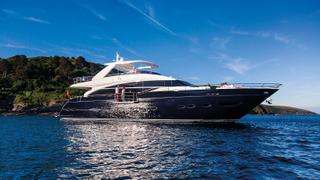 The 26.82 metre motor yacht Rubio, listed for sale by Joe Hill at Princess Motor Yacht Sales, has been sold in an in-house deal with the buyer introduced by Tom Benson.

Built in GRP by UK yard Princess to a design by Bernard Olesinski, Rubio was delivered in 2014 as a Princess 88 model. A striking interior in satin-finished walnut accommodates eight guests in four cabins consisting of a full-beam master suite, VIP suite, a double cabin to port and a twin to starboard, all with entertainment centres, LED television screens and en suite bathroom facilities. In addition, there is accommodation for four crew in two cabins.

The main saloon is elegantly furnished, with light coloured settees grouped in a U-shaped arrangement around a large coffee table to port and a sophisticated entertainment centre including a 46-inch television screen on a rise and fall mechanism. Forward is a formal dining area seating eight guests, but the outstanding feature in this area is a set of sliding doors to starboard opening out to a wide sea balcony.

The aft deck comes with a dining table for eight guests on upholstered seating, enabling comfortable and relaxed al fresco dining while up on the flybridge is a helm station forward, a dining table for eight guests on teak chairs, a large bar with sink, fridge, ice maker and barbecue grill, plus a four-person Jacuzzi. Twin 1,948hp MTU diesel engines power to speeds of up to 24 knots and she is fitted with Trac zero speed stabilisers.