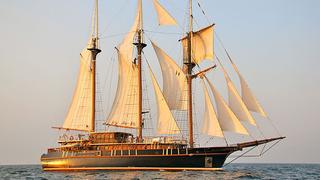 The 48.16 metre sailing yacht Peacemaker has had a $500,000 price drop by Michael Geraghty at Northrop & Johnson

Originally named Avany, she was built by the Maccarini shipyard in southern Brazil using traditional methods and tropical ironwood, and was launched in 1989. The original owner and his family used her in the southern Atlantic Ocean before bringing the ship up through the Caribbean to Savannah, Georgia, where they intended to rig it as a three-masted staysail motor sailer.

The work was never done, however, and in the summer of 2000, she was purchased by a religious group which spent the next seven years replacing all of the ship’s mechanical and electrical systems and rigging it as a barquentine. The refitted vessel set sail for the first time in the spring of 2007, under the name Peacemaker.

Peacemaker has a large deckhouse and five spacious cabins for 10 guests finished in mahogany and modeled after the interior of the yacht Cutty Sark. Under power, two 400hp Cummins engines give her a range of 1,300 nautical miles at 7 knots.