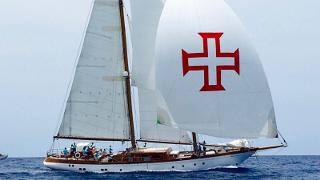 The 34.14 metre sailing yacht Seljm, listed for sale by Tim Carbury and Georges Bourgoignie at Fraser, has been sold with the buyer introduced by Yachtzoo.

Built in Iroko wood on steel frames by the Italian superyacht yard Sangermani with delivery in 1980, she has exterior design and engineering by Anselmi Boretti Integral Designs and was refitted in 2010.

A classic interior in hand rubbed mahogany and teak joinery accommodates eight guests in four twin cabins, all with entertainment systems and en suite shower facilities. In addition there are quarters for five crew.

New mahogany paneling was installed during a 1999 refit in New Zealand and the saloon has a large settee comfortably seating eight guests while the coffee table effortlessly converts into a dining table. There are four large opening windows allowing for welcome extra ventilation, courtesy of sea breezes.

She has proved to be a fixture in the world's classic regattas. In fact, she won the prestigious Concours d'Elegance at the 2013 Antigua Classic Yacht Regatta and rarely fails to make a podium appearance at classic regattas. Under her previous owner since 1995, she has circumnavigated the globe three times.

On the technical side, her main mast and foremast are of Oregon pine and her sail wardrobe comes from North sails while the deck hardware sees all electrical winches by Lewmar.

Under power, a 365hp Caterpillar engine delivers a cruising speed of nine knots.