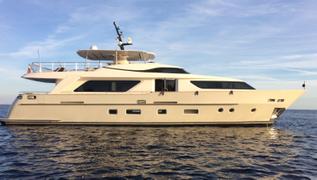 The 27.62 metre motor yacht Minu, listed for sale by Kurt Lehmann at Yacht Moments, has been sold with the buyer introduced by Yacht Nation in Greece.

Minu was the 20th hull to be produced from Sanlorenzo’s SD92 line when she was launched at the Italian builder’s Viareggio shipyard in Tuscany in September 2013.

The semi-displacement 27.6 metre yacht is characterised by the SD92’s refined lines, which recall in miniature the golden age of the transatlantic liners of the 1930s, mixed with a modern twist – a distinctive feature typical on the Sanlorenzo’s navetta-style motoryachts.

The GRP-constructed Minu was designed to accommodate up to eight guests in four cabins, comprising a master suite, VIP stateroom, and two twin cabins. A further two cabins can sleep up to four crewmembers.

When she was delivered in 2013, Minu had undergone a degree of customisation according to the wishes of her then German owner, who chose a fine and bright oak wood for the interiors, including the flooring, while the bathrooms were finished in precious white marble Calacatta with beige veins. Italian design firms such as Paola Lenti and Knol were commissioned for the outdoor decòr, and Minotti, Driade and Maxalato for the interiors.