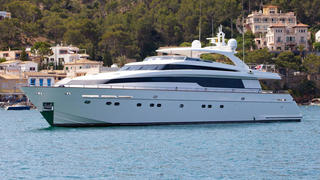 The 33 metre motor yacht Non Plus Ultra, listed for sale by Michael Graff at Northrop & Johnson, has been sold with Drettman Yachts introducing the buyer.

Built in GRP by Italian yard Sanlorenzo to RINA class, Non Plus Ultra was delivered in 2008 as an SL108 model and has had only one owner until now. An interior by Franco and Anna Della Role features high gloss mahogany panelling accommodating eight guests in four cabins consisting of a main deck master suite, VIP suite, double and a twin, all with entertainment centres, satellite television screens and en suite bathroom facilities.

The vast saloon offers a well-equipped bar and ample seating area facing an entertainment centre including a 46 inch flatscreen television set and a Bose stereo surround sound system. Forward is a formal dining area with seating for up to eight guests.

On the aft deck the large dining table can accommodate up to 10 guests for al fresco entertaining and dining while up on the flybridge is an open air kitchen incorporating a barbecue grill, Teppanyaki grill, ice maker and fridge, all sheltered by a hard top with a retractable canopy. The aft area of the flybridge is occupied by large sun loungers and a Jacuzzi spa tub. Twin 2,400hp MTU diesel engines power her to a cruising speed of 24 knots, topping out at 28 knots.