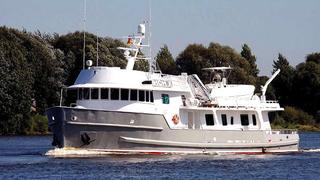 Marcel Borgmann at Sea Independent tells me the German office has listed for sale the 28.5m explorer yacht HCH X.

Built in steel by US yard Halter Marine at their Lockport facility in Louisiana, she was delivered to her owner in 1973 and last refitted in 1994.

Previously named Lady Esther, HCH X offers accommodation for up to six guests and is also capable of carrying up to three crew on board. Powered by twin Detroit Diesel 557hp diesel engines, HCH X comfortably cruises at 12 knots. She can carry around 75,700 litres of diesel in her fuel tanks, meaning she is capable of the round trip from Hamburg in Germany to New York and back on one tank of fuel. Her water tanks store around 75,700 litres of fresh water, ensuring she can make the most of her extended cruising range.