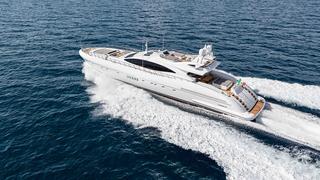 A 40.3 metre new-build Mangusta 132 motor yacht has been sold by Gary Wright and Max Bulley at Y.CO.

To be built in GRP by Italian yard Overmarine, this will be the second yacht of the new 132’ series. Designed by Stefano Righini and the yard, she is a development of the very successful 130 model and offers a choice of five cabins for 10 guests or four cabins and a second saloon. The buyer of the first yacht – launched in May 2015 – opted for the four cabin version while this buyer has chosen the five cabin option.

Innovations on the Mangusta 132 include huge single windows to port and starboard of the main saloon, flooding the interiors with natural light. In addition, the sun deck can be used as a private owner’s deck or could be kitted out as a second helm station.

Naturally, the Mangusta name is synonymous with speed and the new model does not disappoint in this respect. Triple 2,600hp MTU engines are linked to three KaMeWa water jets giving her a cruising speed of 32 knots. Notably, she has also been designed to run at more economical speeds and to this end she is fitted with a pair of Seakeeper gyroscopic zero speed stabilizers to ensure comfort at sea and in port.

Overmarine now covers a wide range of open sports yachts, going up to the Mangusta 165 E, the fastest production motor yacht in the world, with no fewer than four powerful MTU engines giving her a top speed of 40 knots.