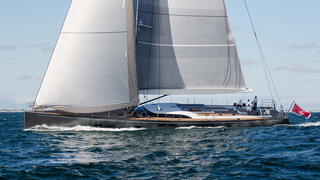 The 31.7 metre sailing yacht Crossbow, listed for sale by Pegaso, has been sold with the buyer introduced by Jonathan Barbe at Edmiston & Company.

With naval architecture by Farr Yacht Design, Crossbow was built from carbon fibre, kevlar, epoxy resin and corecell by South African yard Southern Wind Shipyards to RINA class and delivered in 2016, going on to receive a nomination at the 2017 World Superyacht Awards. Her interior, by Nauta Design, in light oak panelling and walnut flooring accommodates eight guests in four cabins consisting of a master suite, VIP suite and two twin cabins, all with en-suite shower facilities. In addition, there are three cabins for five crew.

The fifth in the yard’s SW102 series, Crossbow features a main saloon and spacious studio as a single open space, subtly separated from the owner’s private area. The crew quarters aft feature a mess area and working galley separated by a door.

Combining the best features of both a flush deck and deck saloon configuration, the design blends a sleek deckhouse and uncluttered lines with high ceilings and 270-degree panoramic windows. As might be expected, she features a high-performance specification, including a carbon fibre mast and boom, EC6+ carbon rigging and a performance winches package. Under power, a 305hp Cummins diesel engine gives her a cruising speed of nine knots and she is under builder’s warranty until September 2018.