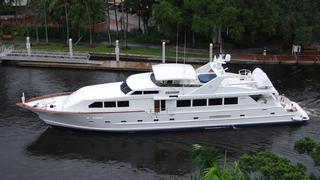 Stotler Yachts sells Broward superyacht By Grace with Worth Avenue

News just in from Mark Osterhaven at Worth Avenue Yachts that he's closed on his listing for sale, the 33.5 metre motor yacht By Grace, with Stotler Yachts representing the buyer.

By Grace was built in aluminium by US yard Broward Marine to an in-house design and delivered in 1995. Her Merritt Knowles interior accommodates 10 guests in a master suite and four twin staterooms. Twin 1,450hp Detroit Diesel engines give her a range of 2,000 nautical miles at her cruising speed of 17 knots. By Grace was extensively refitted in 2010 and 2012, including new engines, new generators, new electronics, a refreshed interior and a reconfiguration of the flybridge. She boasts a large saloon with comfortable seating and a formal dining room. By Grace has the trademark Broward ‘country kitchen’ and extensive outdoor entertainment areas on the aft deck and flybridge.

The full-beam master suite has a king bed and separate his and her bathrooms including a Jacuzzi tub while the port and starboard guest cabins each have twin berths and a Pullman berth plus en suite bathroom facilities. Situated aft, a further two twin-berth cabins are both en suite with showers. Crew quarters consist of a captain’s cabin with en suite head and shower plus a crew cabin with upper and lower berths and an en suite head and shower. The flybridge has a helm station, wing stations, large settees, a bar and a Bimini top.