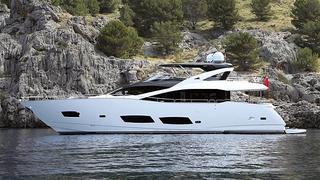 More news now from Harry Bristow-Holmes at Sunseeker as he lists the Sunseeker 28m motor yacht Phantom for sale.

Built in 2012 to RINA class for an experienced Sunseeker owner, she boasts an extensive list of optional extras and a stunning interior. The first production motor yacht to feature a balcony and patio doors, the saloon really opens up to the outside world.

Accommodation is for eight guests in a master suite, VIP stateroom and a double and twin cabin while twin 1950hp engines give her a cruising speed of 21 knots and top speed of 27 knots. Phantom currently has eight weeks charter booked for 2013.

Lying in the South of France, Phantom is asking £4.5 million.