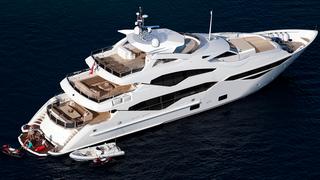 The new 40.05 metre motor yacht Aqua Libra has been sold with Nikolas Makiridis at Sunseeker Hellas acting for the buyer.

Built in GRP by British yard Sunseeker International, Aqua Libra has been delivered in March 2018 as a Sunseeker 131 model. She can accommodate up to ten guests in five cabins comprising a master suite on the main deck, while below deck are two doubles and two twins convertible to doubles. All guest cabins have entertainment centres, Samsung LED television screens and en suite bathroom facilities, and there are a further four cabins sleeping up to eight crewmembers.

The main-deck saloon is open plan and features sumptuous furnishing, an entertainment centre including a large screen television, while the upper deck offers a further lounging area plus a bar and floor-to-ceiling windows giving panoramic views.

Her exteriors are equally fine, laid out over three decks boasting an impressive selection of versatile outdoor living, dining and entertainment spaces. Of special note is the large sundeck hosting a Jacuzzi, bar and sun beds, while the bridge deck is ideal for relaxation and al fresco cocktails.

Aqua Libra is a fun, fast superyacht fitted with twin MTU diesel engines that can reach speeds of up to 24 knots and she is fitted with zero-speed stabilisers for added safety and comfort.

The asking price of Aqua Libra has been withheld.