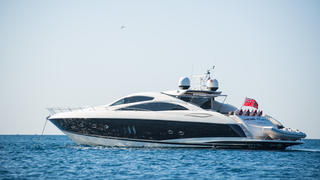 The 26.2 metre motor yacht Hideaway has been listed for sale by Tom Benson at Sunseeker Beaulieu.

Built in GRP by UK yard Sunseeker International, she was delivered in 2006 as a highly specified Sunseeker Predator 82 model. A cool, sleek interior in American walnut sleeps eight guests in four cabins consisting of a master suite, VIP suite, double and twin, all with entertainment centres and en suite bathroom facilities. In addition, there are quarters for four crew in this yacht for sale.

Her gleaming white superstructure makes a superb contrast with her black and white hull, turning heads in every port she enters and emphasising the popularity of this family of yachts.

The main saloon is open plan with walnut flooring and has U-shaped seating, a wine cooler, a dining table seating eight guests, a full wet bar, an entertainment centre including a large screen television and a Bose stereo surround sound system, and a hydraulic opening sun roof to let the light pour in.

The vast aft deck has built in upholstered seating, tables, an electric barbecue and an electric canopy, making her ideal for alfresco entertaining and dining while speeding along the Mediterranean coastline.

During the winter of 2015/2016 she had extensive work done to ensure she is in turnkey condition for the coming season. Twin 1,550hp MAN diesel engines power her to speeds up to 30 knots.