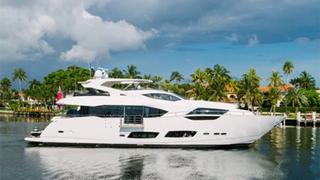 The 28.06 metre motor yacht Hideout, listed for sale by David Johnson at Denison Yachting, has been sold with the buyer introduced by Randy Kires at Atlantic Yacht & Ship.

The split-level main saloon has comfortable settees and an armchair, coffee tables and a wet bar with an ice maker and three bar stools, and there is an entertainment centre, including a 55-inch Samsung LED television screen and a Harmon Kadron stereo surround sound system. Forward is a formal dining area with seating for 10 guests and a special feature is a fold-out sea balcony.

The aft deck comes into its own for al fresco entertaining and dining, offering built-in upholstered seating and a teak table with folding leaves. Up on the flybridge there is a helm station with four helm chairs, a folding radar arch, U-shaped built-in seating, a wet bar, fridge, ice maker, barbecue grill and two tables, all protected from the sun by a hard top that includes a retractable sunroof. Twin 12V 2000 M96L MTU diesel engines allow a cruising speed of 22 knots topping out at 24 knots and she is fitted with zero speed stabilisers.