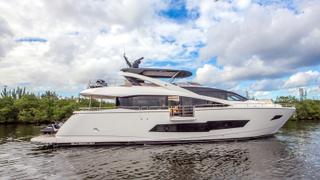 Sunseeker motor yacht It Was a Good Day sold

The 26.29 metre motor yacht It Was a Good Day, listed for sale by Stephen Faraldo at Atlantic Yacht & Ship, has been sold in an in-house deal.

Built in GRP by the British yard Sunseeker International, It Was a Good Day was delivered early in 2017 as a Sunseeker 86 model and carries over $1 million of optional upgrades. An interior in black American walnut comfortably accommodates eight guests in four cabins consisting of an amidships master suite, a forward VIP suite and two twin cabins aft, all with entertainment centres, flatscreen television sets and en suite bathroom facilities.

The generous main saloon has large settees to port and starboard plus armchairs along with an entertainment centre including a 65 inch LED flatscreen television set and a Bose stereo surround sound home cinema system. There is tropical air conditioning throughout while forward is a formal dining area seating eight guests.

Outdoor spaces are ideal for sun worshippers, including an aft deck with built in upholstered seating behind a table on a stainless steel pedestal and a spa tub while the foredeck has a sunbathing area that comes with a removable parasol. Twin 1,950hp MTU diesel engines power her to a top speed of 30 knots and she is fitted with digital fin zero speed stabilisers.