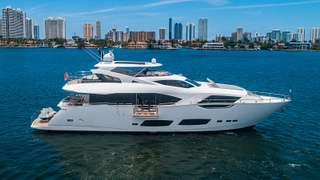 The 28.06 metre motor yacht La Perla has been sold with the buyer and seller represented by Marco Morjain and Henry Schonthal at Reel Deal Yachts in Miami, Florida.

Built in GRP by British yard Sunseeker International, she was delivered in 2017 as a Sunseeker 95 model. A high-gloss interior in wenge wood accommodates up to 10 guests in five cabins comprising a main deck master suite, two mirror-image VIP suites and two identical twins, all with entertainment centres, television screens and en-suite bathroom facilities. Crew quarters allow for a staff of four people.

The split-level main saloon has comfortable settees and an armchair, coffee tables and a wet bar with an ice maker and three bar stools, and there is an entertainment centre including a 55-inch Samsung LED television screen and a Harmon Kadron stereo surround sound system. Forward is a formal dining area with seating for 10 guests.

The aft deck comes into its own for al fresco entertaining and dining, offering built-in upholstered seating and a teak table with folding leaves. Up on the flybridge there is a helm station with four helm chairs, a folding radar arch, U-shaped built-in seating, a wet bar, fridge, ice maker, barbecue grill and two tables, all protected from the sun by a hard top that includes a retractable canopy. Twin 1,974hp MTU diesel engines power her to speeds of up to 28 knots.