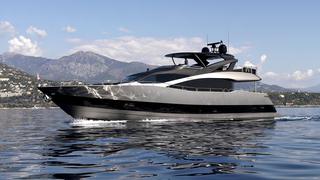 Sold in December 2016, the 28 metre motor yacht Merrick is back on the market, renamed Mirka and listed for sale by Marco Vandoni and Jelena Vezia at Ocean Independence.

Built in GRP by UK yard Sunseeker International, Mirka was delivered in 2013 and has been privately used to date. A dramatic interior by Lazzarini Pickering accommodates eight guests in four cabins consisting of a master suite with a dressing room, a VIP suite, a double and a twin convertible to a further double, all with entertainment systems, television screens and en suite bathroom facilities.

The saloon has massive sofas to port and starboard and a bar forward. The designers managed to create a modular dining table solution that means there is no need for a permanent dining table inside, and the lounge area has a state of the art entertainment centre including a 55 inch Samsung LED television on a rise and fall mechanism plus a Bose stereo surround sound system.

Outdoors, the aft deck has plenty of room for al fresco entertaining and dining and offers spacious areas to relax and sunbathe, including the option for a customised Jacuzzi and an expansive flybridge bar and grill area with a retractable hard top. Stairs from the aft deck of this yacht for sale lead down to a hydraulic swim platform which also serves as a launch and recovery pad for the custom tender.

Mirka has had a €2 million Platinum Package upgrade to all her systems and her bespoke qualities differentiate her from most other yachts in this series. Twin 1,950hp MTU diesel engines power her to a speed of 28 knots.