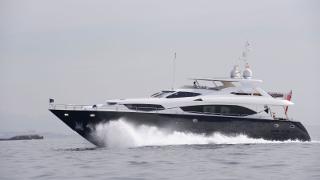 The 30 metre flybridge motor yacht Palomaof London, listed for sale by Nikita Gorchakov at iBoat Boutique in Moscow, has been sold in an in-house deal with Dmitry Osankin introducing the buyer.

Built by in GRP by British superyacht yard Sunseeker International, she was delivered in 2009 and was previously sold in 2014. Cherry wood paneling is the defining theme in her luxurious interior, contrasted with gorgeous fabrics and fine leathers. Generous accommodation is for eight guests in four cabins comprising a main deck master suite, VIP suite and two twins. All have en suite bathrooms in fine marble and stone and one of the twins can convert into a double and the other into a study.

Her main saloon, with a richly decorated interior design, has a bar and spacious seating plus a large television screen and entertainment system acting as a divider from the dining area with formal seating for eight guests.

On deck, Paloma of London offers a multitude of relaxation and al fresco dining areas including a large aft deck cockpit with a table and chairs along with an awning, while the expansive flybridge offers a bar, barbecue, entertainment centre, dedicated dining area and a fixed Bimini top including a central electric folding awning

Twin MAN diesel engines give her a cruising speed of 20 knots and she is fitted with zero speed stabilizers for extra comfort at sea and in port.

She has been meticulously maintained by her second owner with zero tolerance for even the smallest scratch and was offered in turnkey condition.

_Paloma of London _was asking €3.9 million and will remain in the Mediterranean where she will be used privately by her new owner.