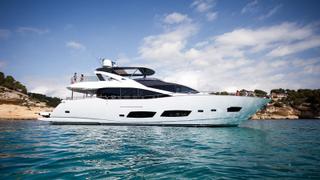 Built in GRP by UK yard Sunseeker International, Spectre was delivered in 2015. She has only been privately used by her original owner and has consequent low engine hours. Her layout offers accommodation for eight guests in four cabins consisting of a master suite, VIP suite and two twin cabins, all with entertainment centres, flatscreen televisions and en-suite bathroom facilities. In addition, there are quarters for four crewmembers in two cabins.

The large open-plan saloon is surrounded by huge glass sections that wrap around the stern aft area offering full panoramic views. To starboard is a low-level console unit including a 55-inch Samsung television screen and an Orca stereo surround sound system. Forward, the main dining table has seating for up to eight guests, while adjacent to the dining area is the custom galley, which has been extended to increase storage and work surface areas by 50% when compared to the standard Sunseeker 28M model.

Outdoors, the flybridge comes with a bar, fridge, electric barbecue grill, flatscreen television and a dining area shaded by a custom hard top. On the foredeck, two large sunpads and comfortable seating areas give yet more space for al fresco relaxation.

Twin 1,950hp MTU diesel engines allow for a cruising speed of 22 knots, topping out at 26 knots and she is fitted with Trac digital fin zero-speed stabilisers.