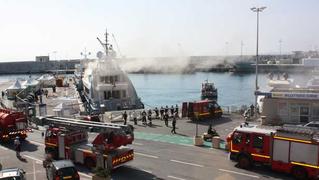 An electrical fault is believed to be the cause of a fire which started this morning on the bridge of the 47.5m superyacht 360° berthed in Nice. French fire services turned up with 21 fire vehicles and the fire was extinguished within an hour. No one was injured.

The yacht is listed for charter with NeoYachting, but her spring charter season could be affected by repairs needed for fire and smoke damage.