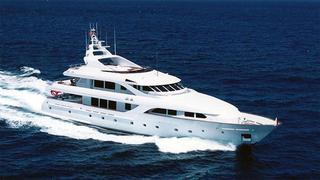 Calls to Thom Conboy at Merle Wood & Associates and Chris Daves at Denison & Daves confirm that Thom acted for the seller and Chris the buyer in today's sale of the 41.5m motor yacht Bossy Boots II.

Built by Intermarine in 1999 to a Paragon/Ward Setzer design, Bossy Boots II was refitted in 2001 and is ABS classed with a Marc Michaels interior sleeping 10 guests in a master, VIP, two doubles and a twin. A proven world traveller, Bossy Boots II cruises at 14 knots and was asking $8.9 million. Chris says she'll now be renamed Lagniappe.