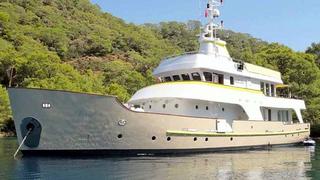 Superyacht Lady Vista back on the market with Edmiston

I reported the sale of the 20m motor yacht Lady Vista in June last year and now James Lloyd at Edmiston & Company tells me that she's back on the market following an extensive refit over the winter.

Lady Vista was built in 1954 by Marinverkstaderna for the Swedish navy as an ice breaker/mine layer and was in service until 2002. An earlier refit in 2008 included new engines and a new interior.

Now Lloyds classed and MCA compliant, Lady Vista sleeps 10 guests in five staterooms and is on the market asking €2.9 million.