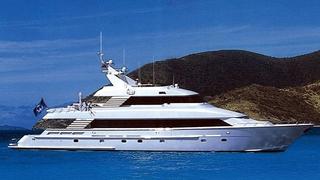 Superyacht Montana Moon back on the market at Ardell

Earlier this year Bill Palmer at Ardell sold the 36m motor yacht Home Stretch and now I learn that he's brought her back on the market, renamed Montana Moon.

Built by Hatteras in 1995 as a tri-decker with flybridge, Montana Moon sleeps 10 guests in five staterooms with no less than three Detroit Diesel 1100hp engines giving her a cruising speed of 17 knots and a range of 1,400 nautical miles.