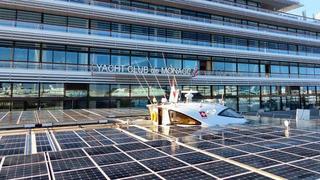 Taking place 10 to 12 July, 2014, the Solar 1 Monte-Carlo Cup race will see competition from set classes of solar-powered yachts in the waters off Monaco. MS Tûranor PlanetSolar is a symbol of the benefits of photovoltaic energy and what solar-powered vessels can achieve, and as such she will join the first-ever Solar1 Monte-Carlo Cup race, serving as a platform for the event and a host yacht welcoming the race's jury panel.

MS Tûranor PlanetSolar made it into the Guinness Book of World Records during her 2010 to 2012 round-the-world journey after crossing the Atlantic in 26 days. She then smashed her own record in own speed record for a solar-powered transatlantic crossing in May 2013, crossing the Atlantic in 22 days, 12 hours and 32 minutes, completing 2,867 miles at an average speed of 5.3 knots.

After the Solar1 Monte-Carlo Cup wraps up mid-July, MS Tûranor PlanetSolar will continue her journey across the Mediterranean, heading to Greece, where the yacht is due to embark on its next mission, serving as a base for research with the University of Geneva’s TerraSubmersa scientific expeditions.