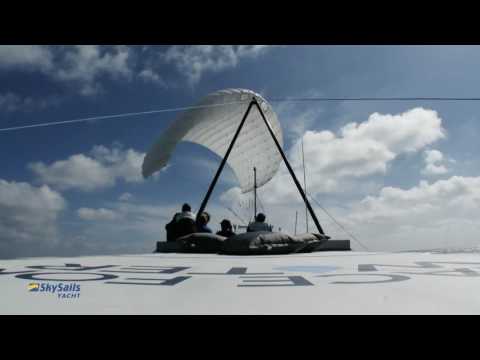 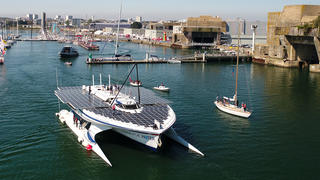 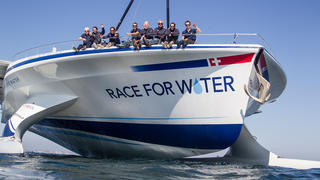 The 31 metre trimaran Race For Water has arrived in Bermuda, in time for the 35th America's Cup, after testing out an innovative kite-sail system during its recent transatlantic crossing.

Previously known as Turanor Planetsolar, this futuristic multihull was launched in 2010 by the German yard Knierim Yachtbau with exterior design and naval architecture by the LOMOcean Design studio.

Marco Simeoni, president of the Race for Water Foundation, explained that the trimaran is undertaking a five-year circumnavigation that will be 100% powered by renewable energy.

"The kite system ideally supplements the self-sufficient propulsion system on board the vessel," he explained. "We are solely using the energy produced onboard by using the power of wind and solar.”

The Race For Water Foundation claims that kite power can generate up to 25 times more energy per square meter than conventional sails. This is achieved by flying a SkySails Yacht kite in a figure-of-eight pattern at 100-150 metres above sea level, where strong and steady winds prevail.

This pioneering vessel has attracted many high-profile supporters, including Michael Møller, director-general of the United Nations in Geneva, who said: “This is an essential project for the conservation of the oceans, our most precious resource.”

Previous research projects conducted aboard this innovative trimaran include a 2015 mission, which sought to disprove the theory of plastic islands, instead claiming that manmade particles are being broken down into a “soup of microplastics”.

However, the latest voyage will have a different purpose, as Simeoni added: “We want to demonstrate that sustainable solutions for ocean conservation can be realised thanks to innovative technologies.”

The stop-offs during this round-the-world tour have been timed to ensure maximum exposure for the Race For Water Foundation. As well as America’s Cup open days on June 21-22, Race For Water will visit Tokyo during the 2020 Olympic Games.

Other renewable vessels aiming to make headlines worldwide include the 30 metre hydrogen-powered catamaran Energy Observer was recently launched in St Malo, with a similar aim of circumnavigating the globe under renewable power alone.