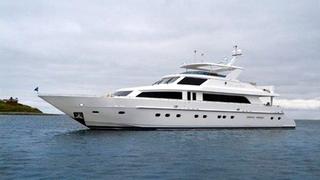 Superyacht Sea Legend back on the market with Hargrave

Michael DiCondia at Hargrave Custom Yachts calls with news that, having been withdrawn from the market a few months ago, the 34.74m raised pilothouse motor yacht Sea Legend is now actively for sale again.

Sea Legend is available for showings during the Fort Lauderdale Show at the Marina Mile Shipyard and is asking $6.5 million.