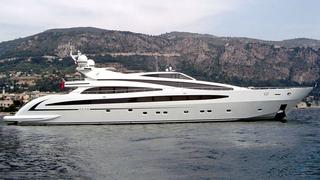 News seems to be flowing in from Burgess right now as Amy Houlston sends word that they’ve taken over the central agency for sale of the 41.6m motor yacht* Ti Voglio Tanto Bene* at a significantly reduced price.

Built in 2007, she’s the fourth and final launch in the ISA 133 series. The original ISA 133 hull structure was modified and stretched in order to allow for larger walkways, a lounge area on the foredeck and a custom garage for two jet skis, water sports equipment and a crane forward of the owner’s cabin.

Ti Voglio Tanto Bene boasts three decks and five cabins offering accommodation for up to 11 guests including a spectacular 45 square metre owner’s cabin on the main deck equipped with a Turkish bath and separate private office. The cleverly conceived split-level main saloon and dining room is designed to maximise living space on board in two separate and spacious areas where guests can enjoy as much privacy as they wish. In an interior by Cristiano Gatto, light-toned woods and rich, dark fabrics and leathers combine to create a modern, elegant ambiance on board.

Ti Voglio Tanto Bene is berthed in Monaco and her asking price is now down from €7.5 million to €5.95 million.