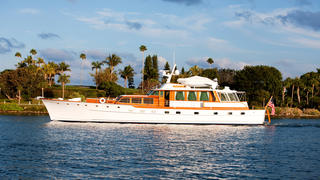 The 25.6 metre motor yacht Wishing Star has changed central agencies and is now listed for sale by Jonathan Chapman at Northrop & Johnson.

Wishing Star was built at the famed US Trumpy yard and delivered in 1963 with a mahogany hull and teak decks. Trumpy yachts have a long association with wealthy Americans and were even the USA presidential yachts of choice for seven presidents, from Roosevelt to Carter.

From 1997 through to 1999 she had an exhaustive $2.2 million complete rebuild returning her to as-new condition in every respect. Accommodation is for six guests in three cabins consisting of a master suite and two twins, all with en suite shower facilities, and there are quarters for four crew.

An oval inlaid table in this yacht for sale is the centrepiece to the dining area, seating up to eight guests comfortably and there are forward and side facing windows. Aft is the main saloon featuring exquisite mahogany panelling, an L-shaped settee with two barrel chairs and an entertainment centre mounted on the forward bulkhead with a 26 inch flat screen Toshiba television set. French doors aft lead out to a generous cockpit that easily lends itself to al fresco entertaining and dining.

Twin 450hp Detroit Diesel engines give her a cruising speed of 12 knots and maximum speed of 15 knots.