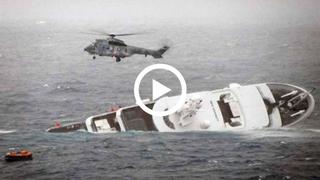 The 60.2 metre superyacht Yogi sank off the coast of Greece this morning, the Greek coastguard reported at noon today.

Built by Proteksan Turquoise in 2011, the yacht was reported to be in difficulties this morning in the area between the islands of Skyros and Psara, 19 nautical miles off the coast.

A 'mechanical failure' has been blamed for the incident which happened in strong seas and Force 8 winds. No one was injured and all on board were rescued by the coastguard helicopter, and transferred to Skyros Health Centre as a precautionary measure.