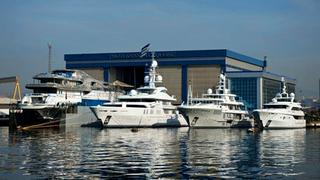 Head of Proteksan Turquoise comments on sinking of superyacht Yogi

Following yesterday's news about the sinking of the 60.2m (198ft) Yogi off the coast of Greece, we have an exclusive interview with Mehmet Karabeyoglu, head of Proteksan Turquoise, the yacht's builder, who was understandably distraught over the incident.

Yogi was en route from Turkey where she had finished a warranty paint period, to her berth in the Med. All eight French crew aboard were rescued by the Hellenic Air Force. Capt. Jean Louis Carrel told Greek authorities that although the weather was rough, he believed the sinking was a result of a mechanical failure with the exhaust system.

Karabeyoglu comments, “What I find surprising is that the first mayday call to the boat sinking was nearly seven hours.  They had power as you can see lights on .”

“What we can see is that she survived seven hours without turning over. So this is enough reason for us to believe she could have been saved – although we are not blaming anyone. There was a Force 8 so the weather made things difficult, but she did not sink due to the weather,” he said.

Responding to our question about an exhaust system accident and loss of engine power reported by the crew, Karabeyoglu comments, “They have said it was mechanical failure, that one engine overheated, and broke the exhaust bellows – but there’s a valve underneath it.”

The Hellenic rescue video shows the Yogi crew appropriately mustered on deck next to the wheelhouse wearing their bright red their survival suits when the rescue helicopter approached. A large life raft was deployed and crew clambered down the port side of the heavily listing yacht to the raft where they were rescued by the military swimmers.

Says Karabeyoglu, “At first we thought all these things happened fairly quickly. But the mayday was 00:30, and the rescue happened at 07:30.”

“My partner has spoken to the owner. He is obviously not happy, he loved the boat. She was just repainted, but we did no work in the engine room as it was perfect. No mechanical work other than routine service of the Cat engines. Perhaps they took bad fuel when they refueled in Istanbul.”

“It’s the first time has happened for us, so we not sure what happens next,’ said Karabeyoglu. ‘We have sent people to Athens who will meet with the crew and interview them; we’re doing everything we can to understand what happened. There will be the testimony of crew and the video. You can see water coming out of the side and power on the vessel so the generators were running – you can tell many things, so the engine room was not flooded. You can see exhaust coming from the hull side so one of engine room generators was running.”

Karabeyoglu also told us that in addition to being able to use the engines to pump water out, there were three bilge pumps, one more than class required. The yacht had three generators plus the emergency generator.

Yogi registered 1028 GT and was built to ABS +A1, +AMS and was classed as Commercial Yachting Service (E). Her stunning profile and interior was designed by Jean Guy Verges, who has designed six other builds by the yard. Yogi was the second of three large yachts delivered by Proteksan in 2011.

John Wickham, who issued a statement on behalf of the builder, said that the yard is actively investigating the incident and will release details as available.

Boat International sources learned yesterday that a purchase offer had been made via Camper & Nicholsons just days before the accident and had been expected to be presented to the owner.