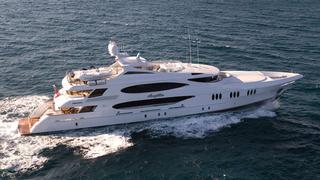 It's feeling a bit like Groundhog Day around here as news arrives of another $1 million price cut – the third this week – on the 49m Trinity motor yacht Anjilis, listed for sale by Frank Grzeszczak and Chany Sabates at International Yacht Collection.

Built in 2009, she is ABS class and MCA compliant. Twin Caterpillar 3512B engines give her a top speed of 20 knots, and she has a transatlantic range. Other notable features include a Glade Johnson interior, a very large swim platform/beach deck and zero speed stabilisers.

Anjilis started the week asking $30.9 million, and is now asking $27.9 million. She has just arrived in Palm Beach and will be at the Fort Lauderdale International Boat Show which starts next Thursday, October 27th.