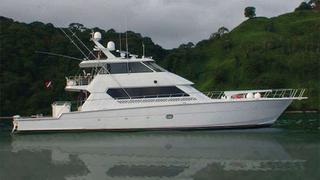 Another one new on the market as John Peterson and Doug Rosensky at United Yacht Sales send news that they've signed the 26.2m sportsfisherman Hideout II for sale.

Built by Hatteras in 2003, Hideout II sleeps eight guests in a master suite, VIP stateroom and two convertible twin cabins while twin 1,800hp MTU engines give her a cruising speed of 20 knots.

Hideout II was purchased by her second owner in 2007. Shortly after delivery she was moved to the Rybovich Boat Yard in Palm Beach Florida. While at Rybovich a refit was performed to ready the boat for her new home in Costa Rica. The refit included a variety of updates and refits including new exterior paint and the galley storage and pantry area was converted to a day head as a convenience for the owner and guests.

In the galley new granite counter tops were installed and new Kitchen Aide appliances were added. The main engines were evaluated and new turbos, and raw water pumps and freshwater pumps were replaced on both main engines. The new owner requested upgraded electronics, so during the refit a new Furuno Navnet system with open array radar was installed, as well as a KVH-7 Satellite communication system. All shipboard systems and equipment were checked before departing for her new home in the Los Suenos Resort in Cost Rica. Used in Costa Rica as the owner’s vacation home, Hideout II is now for sale due to the owner’s change of plans.