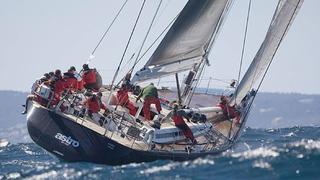 Hard on the heels of yesterday's announcement of a €250,000 price reduction at Ocean Independence on the 24.9m sailing yacht Astro de l'Est, comes a note from Joost Goverts at Nautor's Swan in Spain to say that he's a joint central agent for this superyacht and sold her to her current owner in Spring 2008.

A quick recap: Built by Nautor’s Swan in 2000 and refitted in 2008, Astro de l'Est is a well-proven cruiser/racer yacht. This superyacht cruises at 8.5 knots and has a range of 1,400 nautical miles at 9 knots. She sleeps up to eight guests in a master, double and a twin cabin plus two Pullman berths. Previously marketed at €3.17 million, she’s now asking €2.92 million.