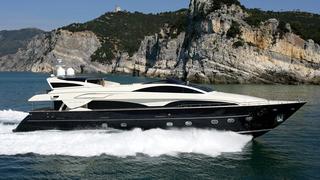 An excited Michael Newton-Woof at Ventura UK contacts me to say he's just signed one of those popular Riva Athena 115 motor yachts for sale, the 35m Iona G.

Built by the Italian yard in 2008 and still under her original ownership she is, says Mike, in superb condition, carefully maintained by captain and crew. Iona G sleeps 10 guests in five staterooms and has a large enclosed skylounge on her aft flybridge, while twin 2775hp MTU engines yield a cruising speed of 24 knots and 28 knots at full throttle.

Iona G is asking €6.9 million, half of her replacement cost of €12 million.