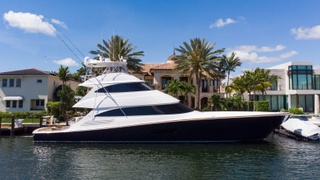 The 28.42 metre sportfish motor yacht Lucky Dick, listed for sale by David Meyer at HMY Yacht Sales, has been sold in an in-house deal with the buyer introduced by Dave Berard.

Built in GRP by US yard Viking, Lucky Dick was delivered in 2018 as a Viking 92’ skybridge model. Accommodation is for 10 guests in five cabins, including a full-beam master suite, two doubles and two twins while separate crew quarters for two staff are accessible from the cockpit.

Entered through electric stainless steel and glass sliding doors, the expansive main deck saloon offers panoramic views. To port are two L-shaped sofas, each with storage below, and an additional couch section, also with storage inside. The sofas are split with an end table and there is a coffee table as well. To starboard is the flybridge internal staircase, a wet bar with ice machine and wine cooler as well as entertainment centre including a Samsung 65-inch television screen on a rise and fall mechanism. For additional seating, there is an occasional chair with an ottoman and five bar stools around the galley island.

The aft deck has a table, built in upholstered seating for al fresco dining, two electric grills and a flip-down television in the flybridge overhang, with stairwell access to the upper aft deck. The enclosed bridge includes a comfortable large L-shaped settee, a wet bar, entertainment centre and ample seating to port and starboard at the helm. Her top speed is 36 knots and her power comes from two 2,600hp MTU 16V4000M96 diesel engines.