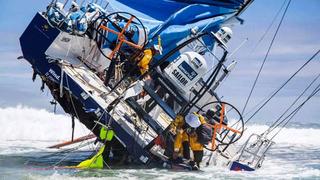 The nine-strong crew of Team Vestas Wind are safely on their way back to civilisation after spending two days sheltering on a remote Indian Ocean island after hitting a reef during the Volvo Ocean Race.

The yacht hit the sandbar at 19 knots on Saturday, according to the Volvo Ocean Race. The team stayed on board, waiting for daylight.

Fortunately no one was injured when Team Vestas Wind's boat hit the reef.

These images show the team returning to boat to retrieve everything they can.

The crew were picked up by a coastguard RIB and taken to nearby Íle du Sud, a near-deserted speck in the ocean with no communication with the outside world.

Once on the islet, the crew were air-dropped food packages by the Mauritius coastguard, including cans of Coke, chocolate and cookies.

Neil Cox, Team Vestas Wind's shore crew chief, told the VOR on Tuesday: “We’ve had nine guys sitting on a sand pit in the middle of the Indian Ocean.

“You’d think it’s a bad movie. You sit there and talk to the coast guard and they’re telling us about everything we’re dealing with on the technical side, then they’re asking me to warn the guys that the reef is riddled full of sharks and barracuda and God knows what else.”

Watch the dramatic moment the yacht hits the reef at 19 knots:

On Tuesday, the crew were picked up by a 20-metre fishing vessel and it's understood they are now safely in Mauritius. They are due to fly to Abu Dhabi at the end of the week.

Team Vestas Wind were on the second leg of the nine-month round-the-world race, which is due to finish in June 2015 in Gothenburg, Sweden.