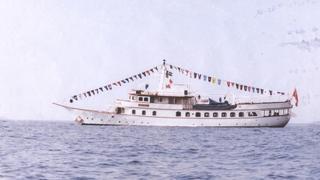 The 38.89 metre motor yacht Amazon has been listed for sale by Coldwell Banker France.

Built in steel by British yard J Thornycroft, she was delivered in 1936 as the personal yacht of Sir Winston Churchill, then First Lord of the Admiralty, but who went on famously to become his country’s leader during World War II. She is capable of hosting up to 60 guests for parties and receptions and sleeps 12 guests in six cabins plus eight crew.

The large saloon has a 40 square metre lounge area including a bar where Churchill could relax with his brandy and cigars and there is also a dining room and conference room. Comprising three decks, she has a sun lounge and large Jacuzzi on the top deck. Twin 700hp Cummins diesel engines give her a range of 4,000 nautical miles at 11 knots. During her long history, this yacht for sale has traveled every ocean of the world. She has had several refits over the years, the most recent being in 2005, but great care has been taken to ensure that the interior remains as it was in Churchill’s day.

After Churchill sold her, she became Welsh Liberty, then Evangeline before finally reverting to her original name of Amazon. Lying in Limay, France, her asking price is €2 million but buyers must be approved by the current owner who has already turned down “unsuitable” offers. Reportedly, she would prefer the buyer to be a collector or history enthusiast “who will honour its dignity”.