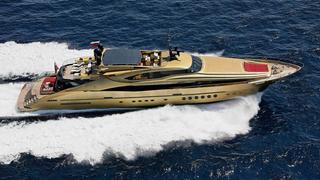 After the superyacht sales peak at the end of 2013, January's tally shows a return to more moderate numbers, while new orders are up significantly on the same month last year.

There were 17 superyacht sales in January, according to our records. This is less than half of December 2013’s (unusually high) tally of 45, but similar to January 2013’s tally of 18. The largest was 45.7m, 2007 Palmer Johnson motor yacht O'Khalila (now Skyfall II), followed by 43.28m motor yacht Antinea (now L'albatros), built by Sterling in Japan in 1985. Nine of the yachts were 2000 launches or younger – including three yet to hit the water – and the highest asking price was €9,900,000 for 38.5m Sanlorenzo Onyx (now Bliss Easy), although it is impossible to know what any of January’s superyachts actually sold for.

According to our sources, seven superyachts were ordered in January, exactly the same figure as December last year and more than double the number ordered in January 2013. The largest was a 68m motor yacht, ordered from CRN in Italy and due in 2017. Two of the count were sailing yachts, including a 35.2m from Nautor’s Swan in Finland, due for delivery in 2016.

We know of seven superyacht launches made in January, fewer than half the 15 boats that hit the water in December last year, but similar to January 2013’s figure of nine. The largest of the month’s tally was a 55m Amels, known as LE 180-465, followed by Feadship’s 46.22m Como. Three more of the boats measured 40m and only one was under 30m.

We were told of 10 superyacht deliveries in January, up on both December 2013’s seven and January 2013’s two. The largest was 67.15m Damen superyacht support vessel Sea Axe 6711. The rest of the tally was quite a step down in size, the largest being the 34.53m Sunseeker 115 Sport Yacht. Four of the yachts were from British yards and three from Italian yards.