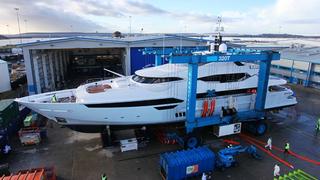 March brokerage sales show a striking contrast to the same month last year, when we described the market as 'failing to warm up in line with seasonal expectations'. The March 2014 tally is nearly 10 sales higher than the previous month and a standout figure among first quarter monthly tallies in general.

Thirty-five superyacht sales were reported in March, a soaring increase on both February’s tally of 26, March 2013’s tally of 23 and the highest monthly count of any first quarter for the last five years. The sizes of yachts that left the market in March were moderate, with an average length of 32m. The largest was Lazy Z, a 51.4m motor yacht built by Oceanco in 1997, followed by the 50m, 2009 Trinity motor yacht Sapphire and the 40m, 2009 Bloemsma Van Breemen sailing yacht Valquest. Nine of March’s sales were of Italian superyachts, seven were US-built, five were Taiwanese and four were from The Netherlands.

We know of 29 superyachts coming to the market in March, up from February’s 22 but down from March 2013, when 31 came to the market. The largest was the 52m, 2010 Palmer Johnson motor yacht DB9, followed by the 51.5m motor yacht Beauport, built in 1960 by Davie Shipbuilding in Canada. Eleven of the yachts newly for sale were US-built, while seven were Italian. Well known superyachts to come to the market include Richard Branson’s 32m sailing catamaran Necker Belle, launched by CMN in 2003 and 43.2m sailing yacht Mystere, built by Vitters in 2006 and a winner at the 2007 World Superyacht Awards.

Thirteen superyacht launches were reported to us in March, exactly the same figure as February and up on 11 launches in March 2013. The largest was an 81.8m Abeking & Rasmussen motor yacht project number 6497, followed by 65.5m Amels known as 6503 and 61m CRN motor yacht known as hull 133.

There were six deliveries in March according to our records, the same number as both February 2014 and March 2013. The largest was the 47.25m motor yacht Blush from Sunseeker, followed by the 46.22m Feadship motor yacht Como (now Lady May). Builders from the UK, the UAE and the Netherlands were responsible for this month’s tally in equal shares.