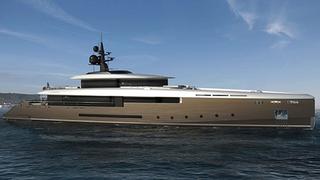 Sales are up and yards are revealing some impressively sized yachts, including a 125m – and with stable orders, the coming years look set to be just as healthy.

We know of 35 superyacht sales in March, significantly up on 25 in February and exactly the same figure as March 2014. This March’s largest sale was 57m Trinity motor yacht Lady Linda, launched in 2012, followed by the 50.02m Overmarine motor yacht Project Starburst, due in 2016 and 49.68m Oceanco motor yacht Anedigme, launched in 1993. Eight of the count were four years old or less and as usual the most common nationality of yard was Italian – although the US wasn’t far behind.

Superyachts new to the market

Thirty-four superyachts were reported new to the market in March, an increase on the previous month’s 27 and 29 in March 2014. The largest was 55m Benetti motor yacht Cakewalk, launched in 2013, followed by 52.02m motor yacht Felix, launched by Amels in 2004. A sailing yacht was also among the top six, the 47.25m Troy, due to be launched by Esenyacht in 2016. The Netherlands and the UK were the most common nationalities of boats and five Sunseekers were among the tally.

Nine superyacht launches were reported to us in March, down slightly on 12 in February and 13 in March last year. There were some seriously large boats among the count, including 125m Lürssen motor yacht Tatiana, 77m Silveryachts motor yacht Silver Fast and 72m Golden Yachts motor yacht O'Pari 3. There was a variety of nationalities in the mix, with Turkey, the UK, Greece, Croatia and Australia all featuring.

We know of eight superyachts being delivered in March, up a little on both the previous month’s score and the previous March’s score – both six. The largest was a sailing yacht, 60m Perini Navi Perseus3, followed by 56m Surpina and 50m Vica – both Benetti motor yachts. Heesen also had a good showing with the motor yachts Sibelle, 50m and Asya, 49.7m.