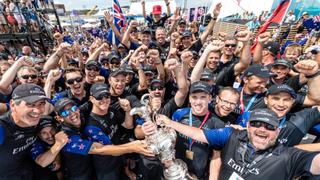 More than a month after Emirates Team New Zealand emerged victorious from the 35th America’s Cup and the Kiwi team has revealed that writing their name into the history of sailing may be tricky.

The Auld Mug currently bears the names of all of the 34 teams that have previously won sailing’s ultimate prize, however space is limited, and since Team Alinghi’s name is in a larger font than the others, there is currently no room for Emirates Team New Zealand to be engraved.

The revelation comes via the New Zealand Herald, who asked Steve Mair, commodore of the Royal New Zealand Yacht Squadron, if the dilemma could be solved by enlarging the base.

“After a certain period of time, you can't have it 20 feet tall," he replied. “The Cup has already grown to 1.1 metres high and weighs over 14kg. We have to figure out a way to future-proof it."

As the Defender, the Royal New Zealand Yacht Squadron now has the right to choose the format, date and location of the next America’s Cup.

Early reports had suggested that it would take place in Auckland in 2021 with the format reverting back to sailing monohulls instead of the foiling catamarans that featured at the last two iterations of the America’s Cup.

However, British skipper and Boat International columnist Sir Ben Ainslie has expressed his opposition to such a move, telling the Daily Telegraph: “I think the foiling multihulls have proven to be great for the spectators and it would be a shame to move away from that."