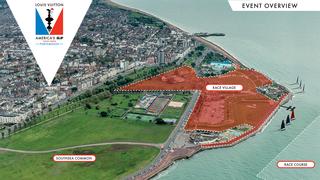 The first tickets are up for grabs for the recently announced America’s Cup World Series in Portsmouth from 21st July to 24th July 2016.

It's the second ACWS to be held in Portsmouth. The first Portsmouth ACWS, in July 2015, drew in more than 245,000 spectators – 25,000 of whom were watching on the water. That's despite bad weather on Sunday that cancelled racing and public viewing.

Perhaps it was Ben Ainslie's endorsement of the town – where his team Land Rover Ben Ainslie Racing is based – that helped organisers decide to stage another ACWS in Portsmouth.

Plans for the second Portsmouth ACWS were unveiled in November, revealing a redesigned layout that will see the racing simplified, unfold within a smaller area and take a route that keeps the action close to the shoreline.

The Portsmouth ACWS event has teamed up with the 1851 Trust for the first day, which will be called '1851 Thursday' and focus on youth engagement.

"In putting together the 2016 plans, we talked to our fans [about] what they wanted to see. The feedback outlined that fans wanted to learn more about the sailing and the teams, the technology, the America’s Cup, how it all works in detail. Therefore, we are offering a more compact and content-rich environment bringing the boats & teams to the Race Village with team display areas and a new Techzone."

You can buy tickets for the Portsmouth ACWS online now.