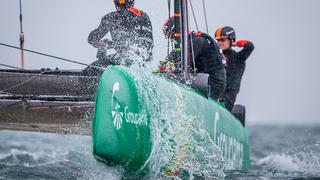 The French city of Toulon will host the Louis Vuitton America’s Cup World Series in September 2016. The Mediterranean destination will become the third European city to host racing in this series after events in Portsmouth and Gothenburg last year.

Toulon is the fifth addition to the 2016 racing calendar. Regattas have already been announced for Oman and New York, and the “windy city” of Chicago. A second event in Portsmouth is also scheduled.

“We are expecting a passionate reception for Franck Cammas and Groupama Team France as the series builds towards the 2017 America’s Cup racing in Bermuda,” said Harvey Schiller, the Commercial Commissioner of the America’s Cup.

Cammas, the skipper of the French team, was injured in a training accident in December. He is now on the mend and expressed his excitement to race in front of a home crowd.

“It is tremendous to have a chance to demonstrate to French fans what this new America’s Cup racing is all about” said Cammas, “French sailors and fans are passionate about multihulls and speed.”

Hubert Falco, the Mayor of Toulon, said the city council is proud to host the America’s Cup event and added that the event “will give global exposure to our port and harbour.”

A sixth event is expected to take place in Asia in November 2016, but is yet to be announced. The six teams have also agreed to a final regatta at the beginning of 2017 that will provide the last chance to gain valuable bonus points for the Louis Vuitton America’s Cup Qualifiers in May 2017.