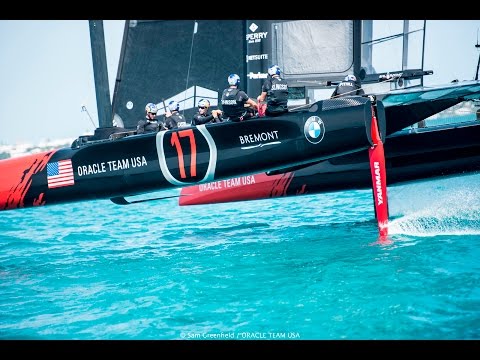 Hot on the heels of America’s Cup rivals SoftBank Team Japan, the Defender Oracle Team USA has shown off its first foiling tack.

As the video below explains, the American team carried out this manoeuvre just a few days after the Japanese team’s foiling tack breakthrough back in April.

Tom Slingsby, sailing team manager and tactician at Oracle Team USA, said: “We had some big crashes in our first attempts, but we got there and were able to do it.”

He adds that the difference between a team that can execute a foiling tack and team that cannot could be anywhere from 50 to 200 metres, depending on the prevailing wind conditions.

The manoeuvre, which involves turning the AC45 catamaran into the wind while flying on its four foils, has been described as a game changer, with the team that perfects it likely to take home the 35th America’s Cup following next summer’s sailing showdown in Bermuda.

Grant Simmer, general manager of Oracle Team USA, added: “The reality is that the Japanese led the way a little bit with that, and I quite liked watching us figuring it out and being able to match them in a matter of days. It’s a thing that was really important to the team”

Oracle Team USA will be hoping to show off their foiling tack later this month at the America’s Cup World Series Toulon, although they may have to do so without their skipper Jimmy Spithill, who is currently recovering from elbow surgery.